When we lived on the farm, we had two large trees growing almost as one near the house.  One was a spruce tree and the other a poplar.  Both were probably 100 years old or maybe even more.  They were big trees and had grown there for so long the two were almost one, although being of a different species they were still distinct.

One night during a terrible storm, we heard an explosion that rocked our home.  The windows reverberated from the force.  We were far from mines in the area that occasionally set off blasts: we couldn’t figure out any other source for such a loud noise. By morning the storm had passed, and we ventured out where we found the cause that rocked our home.  Lightening had hit the poplar tree, stripping it of its bark which was strewn across the yard and breaking the mammoth tree in half.  The inside of the remains was still smoldering despite the rain that had soaked it all night.

The spruce tree was unharmed save for the strips of poplar bark that hung from its limbs as if its companion had clung as a final farewell to its long time neighbour and friend.  One was taken, the other left. 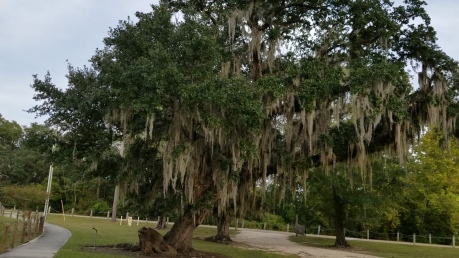 While travelling, I came across another scene where it appeared something similar had happened.  The remaining tree on the right prospered, its limbs large and overseeing its domain while sheltering of furry and feathered creatures in its strong limbs.  Rooted at its base were the hollowed remains of its companion, their roots intertwined having shared the same soil for perhaps longer than a century, maybe even two or three before the one came to its demise.

I marveled at the sight, curious as to how the one had come to such tragedy while the other seemingly remained untouched.  I noticed a sign not far from their location which informed the curious that Hurricane Katrina was responsible for this and so many other tragedies when it swept through the area.  One taken, the other left.

Scripture tells us there will come a time when some people will be taken, and others left. The only way to remain is to trust in the one who created us, loves us and wants the very best for us.  He gave His all to make it so.